Any casual observer of Larchmont Boulevard can see that the street draws a wide variety of people to its sidewalks. But how does that flow of visitors play out over the course of a day? I decided to pick a date — Friday, September 15th — where I would pop in on the street at various times of the day to see for myself. To prepare for my stakeout, I consulted the business directory on this website and discovered that every day there are doors open for business somewhere on the boulevard from 5:00 a.m. to 11:00 p.m.  On the appointed Thursday night before my mission, I set my alarm clock to a frighteningly early hour and told my family I’d see them on Saturday. 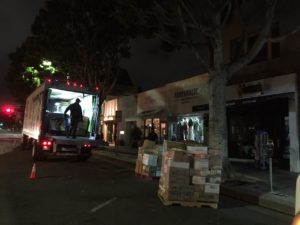 4:45 a.m.  Whoa, it’s dark this early. A crescent moon hovers over the Rite Aid. The only vehicles on the street are two delivery trucks and my car. It’s pretty quiet except for the pop music coming from a speaker above the Daas Optique door. I say hi to the man delivering food to Louise’s and he waves back. I walk toward the south end of the boulevard and accidentally startle an employee at Peet’s who is setting out metal chairs. I apologize, vow to be a less stealthy pedestrian and turn around. In the middle of the street, a man jogs with his dog. As I pass Diptyque, a man washing the store’s windows gives me a hearty “Good morning!” Clearly, my louder steps are working!  I say “good morning” to him, as well as the guy who has just appeared to deliver some newspapers to the Above the Fold newsstand. To celebrate all this friendliness, I dip into the Starbucks for a coffee and in the process become the first customer of the day on Larchmont Boulevard. I ask my barista, Natalie, what she thinks of working at such an early hour. “It’s always pleasant here in the morning, she says. “It’s so peaceful.”

5:30 a.m.  There’s beginning to be a light, but steady stream of customers arriving at Starbucks, Peet’s and Noah’s Bagels. On the sidewalk, a group of five women runners and two dogs meet outside of Flicka. Once assembled, the lead runner—in a lighted vest—takes off in the pre-dawn dark and the others follow. Across the street, Hayden and the staff at Flywheel are getting ready for their 6:15 a.m. class. As Hayden hoses down the sidewalk and fills a bowl of water for a passing dog, he tells me that they are preparing the “front office”—the sidewalk and parking lot—as well as the “back office”—the actual facility.

6:00 a.m.  People in athletic gear are starting to gather at Flywheel. A few moments later, others with yoga mats begin to appear and head towards Yogaworks.  A woman hops out of her car to use the ATM at the Wells Fargo bank. Within the next half hour, traffic gears up on nearby Beverly Boulevard and more people arrive on the boulevard to grab a quick nosh. Inspired by all the get-up-and-go of these early-risers, I go home and take a nap. Wait, I mean, I start mapping out a personal plan for a more productive life. 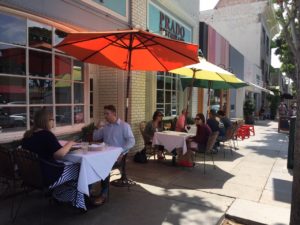 12:30 p.m.  The boulevard is now humming with a mix of business executives, parents with small children, retirees, millennials, and local neighbors of all ages. A variety of dogs are being walked by their owners. Tables and chairs have appeared on the sidewalk outside of many of the eateries, as well as racks of clothing outside a handful of boutiques. A group of three men and a woman who are “working on a local house” enjoy sandwiches at Larchmont Wine, Spirits & Cheese. And a group of men at Peet’s, wearing security lanyards from their office, discuss offering “premium service.” Curiously, there is a gaggle of young boys carrying skateboards. As this is a school day, this seems a bit odd. I spot two very young ladies enjoying a salad at Muraya and figure that they might be able to set me straight. Sure enough, Lucia and Stella, two seventh graders at St. Brendan School explain to me that their school gets out at noon on Fridays. Apparently there is a great trek of 5th, 6th, 7th and 8th graders from the school to Larchmont every Friday. “Some kids walk in crowds, some two by two and some get driven,” says Lucia.

3:00 p.m. The lunch crowd is pretty much gone, but a new wave has arrived—students from Marlborough School. As it’s just a few blocks from their school, Larchmont Boulevard has become the go-to destination for these 7th-12th graders to unwind. I ask Annette and Lindsay, two 11th graders, to speak with me. How do I know they are students? Well, the school uniform is a bit of a give-away, but the binder clip used as a barrette in Annette’s hair confirms it. These two, who both live in the Valley, have been visiting Larchmont a few days a week after school since they were 7th grader. Generally, they come for a coffee and a snack, but the other draw is the social scene. “It’s gotten to the point where it’s not unusual to run into friends,” says Lindsay. 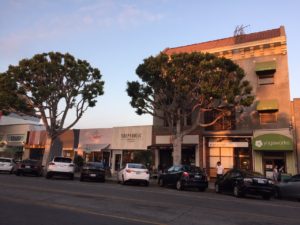 6:30 p.m. The early evening sun is casting a golden glow on the boulevard. Families with younger kids gather at Burger Lounge while couples can be seen taking seats at Le Petit Greek and Kiku Sushi. Both children and adults can be seen licking ice cream cones as they walk down the boulevard. Shoppers step in to the several stores that are still open such as Hardware and Mo:Vint.  At Chevalier’s Books, the staff prepares for an event where prize-winning poet Natalie Graham will read from her collection, Begin with a Failed Body.  As interested listeners begin to gather at the book store, I cross the street. Walking past Perverse, I hear three middle-aged women as they look over the vast array of sunglasses available.“There are so many choices!” says one. “So many choices!” her friends echo. 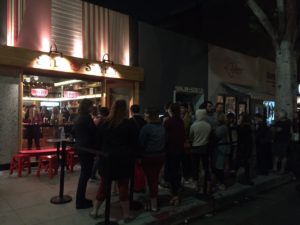 10:35 p.m.  Late night on Larchmont brings the sounds of laughing, conversation and….crickets!  Although smack in the middle of the second largest city in the United States, Larchmont Boulevard is surrounded by residential neighborhoods where, apparently, a fair amount of crickets reside. The result is a sonic landscape that has to be heard to be believed.  On the west side of the street, both Tacos Tu Madre and Jeni’s Ice Creams are still serving customers. At Jeni’s, a young couple from Burbank, Natalie and Will, tell me that they stopped by on their way home after seeing a movie at the Grove. On the east side of the boulevard, a line of approximately twenty people winds toward the counters of Salt and Straw. Gone are the knee-high ice cream lickers of an earlier hour—these are millennials who are eager to try flavors such as Black Olive Brittle and Goat Cheese. Here I meet Teresa and Tyra. As it turns out, Teresa, who is from Orange County, is a friend of the poet Natalie Graham. She and Tyra saw Graham read at Chevalier’s, dined at Vernetti and decided to cap off their evening with some ice cream. I consider staying to see who will be the last customer of the day on Larchmont Boulevard, but at this point, I feel it’s time to hang up my vaguely-stalkerish ways of the day and just enjoy the late night beauty of the street. With the crickets serenading me, I head home.

Finding Our Way to Larchmont: Episode 2

September 6, 2017. By Jan Taylor Bauer | News of LA
My soon-to-be husband & I were introduced to Larchmont Village in 1993, by a real estate agent who didn’t really listen to our budget constraints.  Even though it was post-riots, and the real estate market was declining, there was no way we could afford the home she showed us in the 500 block of...