On a crisp March afternoon, in a ceremony that brought a moment of united patriotism, a small crowd of all ages gathered in a parking lot to witness the retiring of a weathered American flag and the raising of a new flag to fly over Larchmont Boulevard.

The ceremony was scheduled due to the generosity—and observant nature—of local resident, Eric Dortch. Dortch explained that he was in the city parking lot across from the Larchmont Beauty Center when he noticed something was amiss.

“I was using the meter in the parking lot on a windy day and heard fabric flapping,” said Dortch. “I looked up and couldn’t believe it was our flag in that condition.”

What he saw was a tattered flag that was raised just two years earlier by a local Girl Scout troop led by Joane Henneberger Pickett, the owner of the Larchmont shop, Pickett Fences.

Dortch then called Tom Kneafsey, president of the board of the Larchmont Village Business Improvement District, and told him that he would like to donate a flag.

On the appointed day, members of Cub Scout Pack 16 and Boy Scout Troop 10, the oldest continuously charted troop in the nation, arrived to preside over the flag retirement and replacement. Following a precise protocol, the boys read aloud the meaning of the stars and stripes and carefully folded the tired flag once it was released from the post.

Cubmaster Scott Hanna told those assembled that the flag would be destroyed and burned with respect in a later ceremony that night during the Cub Scout pack meeting. The boys then raised the new flag where it was greeted with a Pledge of Allegiance by all those in attendance including members from Larchmont business groups, the local press, curious passersby and Los Angeles City Councilmember David Ryu.

“Especially in these trying times,” said Ryu, “we can all gather around our flag—a symbol of freedom, a symbol of who we are as Americans. This is such a treat.”   Onlookers taking in the sight of the new flag shared his enthusiasm. Comments included, “Very nice!”  “So beautiful!”  “Now we’re talking!”  “Looks so good!” and “Much better!”

Unfortunately, Dortch was unable to attend the ceremony due to a work conflict, but his wife, Lisa, was there to accept the thanks of all of those around her.

“I wish I could have been there,” said Dortch. “I’m happy to know that the Boy Scouts were there to handle our old and new flag and that there are plenty of fellow patriots in our community. Thank you to Tom Kneafsey for rallying the troops.”

As Ryu promised that he would get a California flag previously flown over the state capitol to join the new American flag, the boulevard can expect another festive flag raising ceremony in the near future. 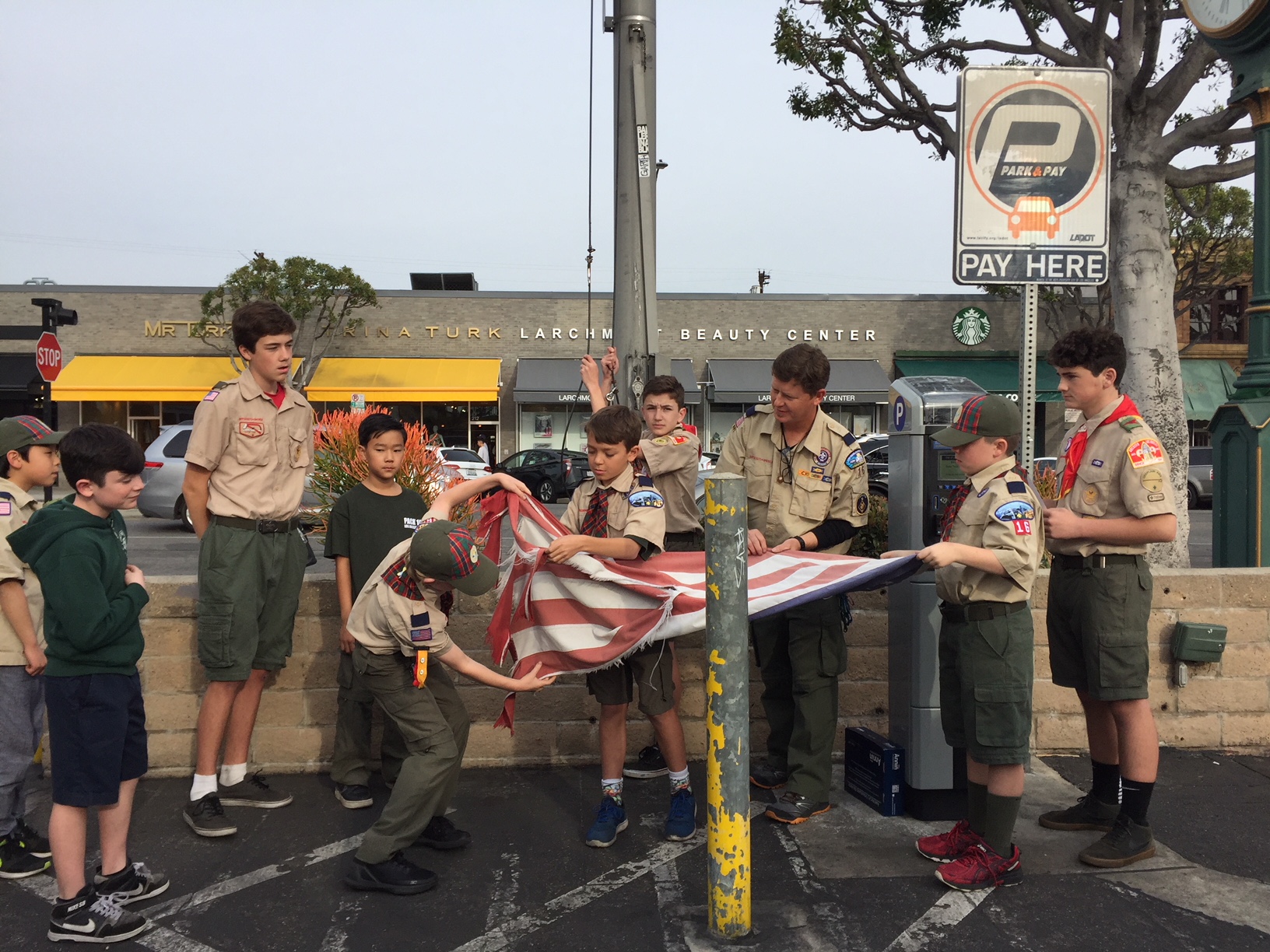 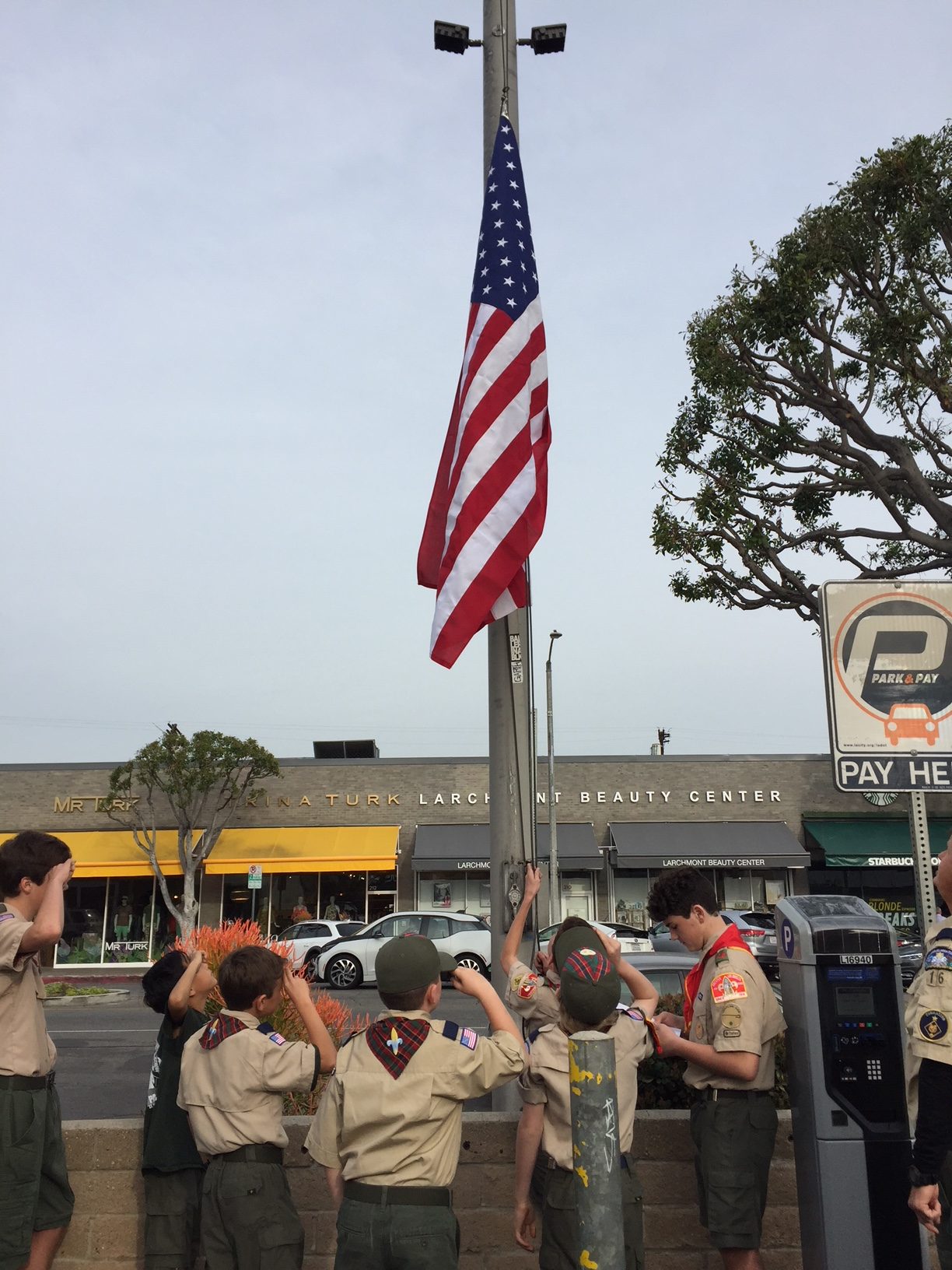 The Beauty of Spring on Larchmont

February 22, 2018. By Sheila Lane | Around Larchmont
More than one transplant from the East Coast or the Midwest has complained that Los Angeles has no seasons. But once you’ve lived here a while, you can see the signs—sometimes literally—like the ones on Larchmont Boulevard promoting new spring beauty products and treatments. Over at MAC Cosmetics, the operative word for spring will...