Summer may be over, but whether you took that vacation to a faraway land or not, tasting the offerings at some of the over twenty eateries on Larchmont Boulevard will make you feel like a jetsetter.

First stop on your global tour is the Caribbean, courtesy of Prado. Javier Prado, the owner and chef, first made his mark on the L.A. culinary scene as an original chef at The Ivy in West Hollywood, with his fellow chef and brother, Toribo. During his ten years at the Ivy, Javier began thinking about starting his own place. Looking for a cuisine that would stand out in the competitive Los Angeles restaurant landscape, the native Mexican, French-trained chef went on a research trip with his brother. 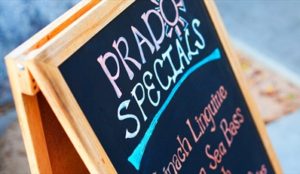 “We went to Trinidad and Tobago, Jamaica and Barbados,” said Prado.  “We went to various restaurants and got a bunch of ideas and recipes.”  Adding his own creativity, Toribo went on to co-found the flagship Cha Cha Cha restaurant in Silver Lake in 1986.  Four years later, the brothers opened up the more upscale Prado.

Today, diners clamor for Prado’s specialties such as crab cakes and pollo negro, which Prado said is similar to jerk chicken. But it’s the soft-shell crab, available only from April to October, which lingers in in the minds of many Prado diners.

“We’ll get calls during the year,” said Prado, “Call us when you have the soft-shell crab.”

Across the street, Vernetti, which opened in 2015, showcases the flavors of Italy.

Owner Steve Vernetti, a French-trained chef, said he steers away from the over-flowing sauces and mounds of bubbling cheese commonly associated with traditional American-Italian restaurants. 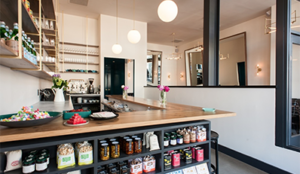 “I think people’s palates have gone away from that and the younger crowd is looking for something that it a little bit more applicable to their Los Angeles lifestyle.”

Vernetti said he begins with old world recipes and cooks them with a modern hand.

“I’ve applied a French approach to Italian cuisine so everything is simplistic and really focuses on the individual ingredients.”

As for the authenticity of Vernetti’s cuisine, the key, he said, is to source the proper ingredients, such as Cacio de Roma, a cheese that is only made in Rome.

“I had a guy from Rome who had been in L.A. for five or six years,” said Vernetti. “He literally got misty-eyed after he ate our cacio e pepe because it reminded him of home.”

The house specialty at Vernetti is the array of fresh-made pastas. Vernetti said that his staff also makes some of their own cheeses in-house as well as giardiniera—pickled vegetables—and jams. The restaurant also dry ages its own meats and is beginning to experiment with smoking techniques.

A few doors down, you can transport yourself to the Peloponnese with the Grecian cuisine of Le Petit Greek. This estiatorio—which will celebrate 30 years on the boulevard next May—is owned by brothers Tom and Dimitri Houndalas.  According to Dimitri’s wife, Nora Sullivan-Houndalas, the brothers were raised in Napflion, Greece where their father owned several restaurants 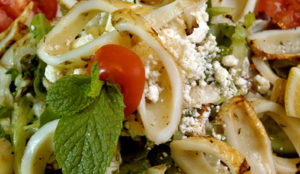 “They grew up in the restaurant business,” said Houndalas, “It’s in their blood.”

Today, Le Petit Greek serves what Sullivan-Houndalas called, “traditional Greek dishes with a California spin.” Dishes are designed to be health-conscious and take advantage of seasonal and local produce.

“People think of Greek food as lamb and while that is our signature dish,” said Sullivan-Houndalas, “the truth of the matter is that there’s a tremendous amount of fish and fresh vegetables.”

That house specialty, lamb shanks, is made from grass-fed, organic lamb which is braised for four to five hours with fresh tomatoes and red wine.

“They are very tender and lean,” said Sullivan-Houndalas. “They fall off the bone.”

If you’re craving a taste from another part of the world, Muraya, formerly known as California Roll and Sushi Fish, offers American-Japanese fusion. Owner Chae Kwak recently changed the name of his restaurant and updated its interior to reflect the more sophisticated taste of his clientele. 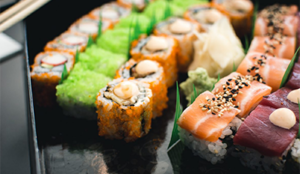 Having run the restaurant for eleven years, Kwak said he has maintained some of the recipes of the original owner, but has adapted the menu over the years as his diners have become more educated about Japanese cuisine.

“They know there’s a larger variety of fish than tuna and salmon,” said Kwak.

However, Kwak knows that some standbys, like his most popular dish, crispy rice and spicy tuna, will always be in demand.  Kwak says he elevates this dish and others with quality ingredients.

“We have really premium sashimi,” said Kwak, “so that means we have great sushi as well.”

These four restaurants are only a fraction of the options awaiting Larchmont diners looking to travel around the world in a lunchtime.  Others include Albert’s Mexican Grill and Kiku Sushi. And on the “domestic” front, Village Pizzeria basks in a Brooklyn glow while Sweetfin Poke’ brings a bit of Hawaii to the neighborhood.  So for a taste of the world, without a passport, book your next culinary adventure on Larchmont Boulevard.

For hours and locations, please visit our directory.

September 6, 2017. By Heather Duffy Boylston | Food & Wine
Even the most urbane coffee drinkers can sometimes be stumped when hearing some of the esoteric coffee orders in LA. Maybe it’s time to learn once and for all, what is a flat white? With national coffee day coming up on September 29th and all the coffee options on Larchmont, it seems the time...