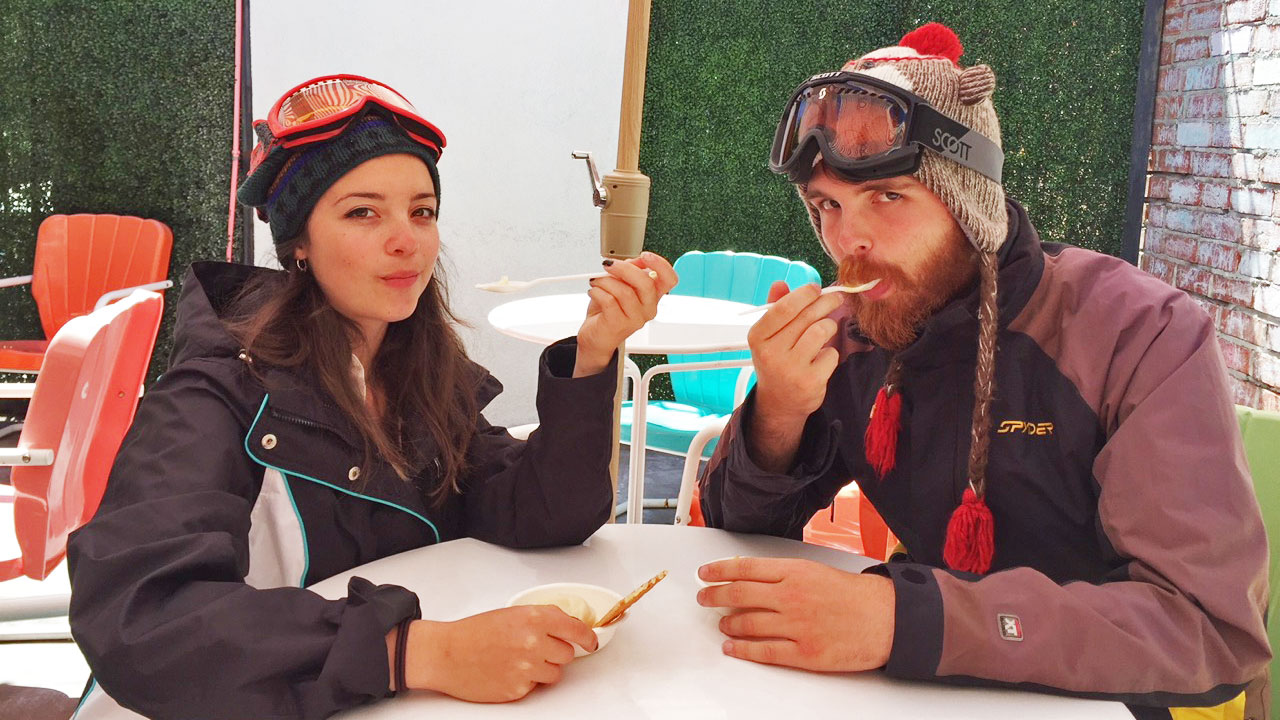 It may be summer, but on Larchmont Boulevard there remains a frozen tundra. It is a landscape full of tasty, frozen treats that will reward the intrepid adventurer who accepts its beckoning call. Two such explorers, Sam Lane and Wolf Woodcock, allowed me to follow them as they searched for frozen concoctions that contained ice cream, sherbet or frozen yogurt. 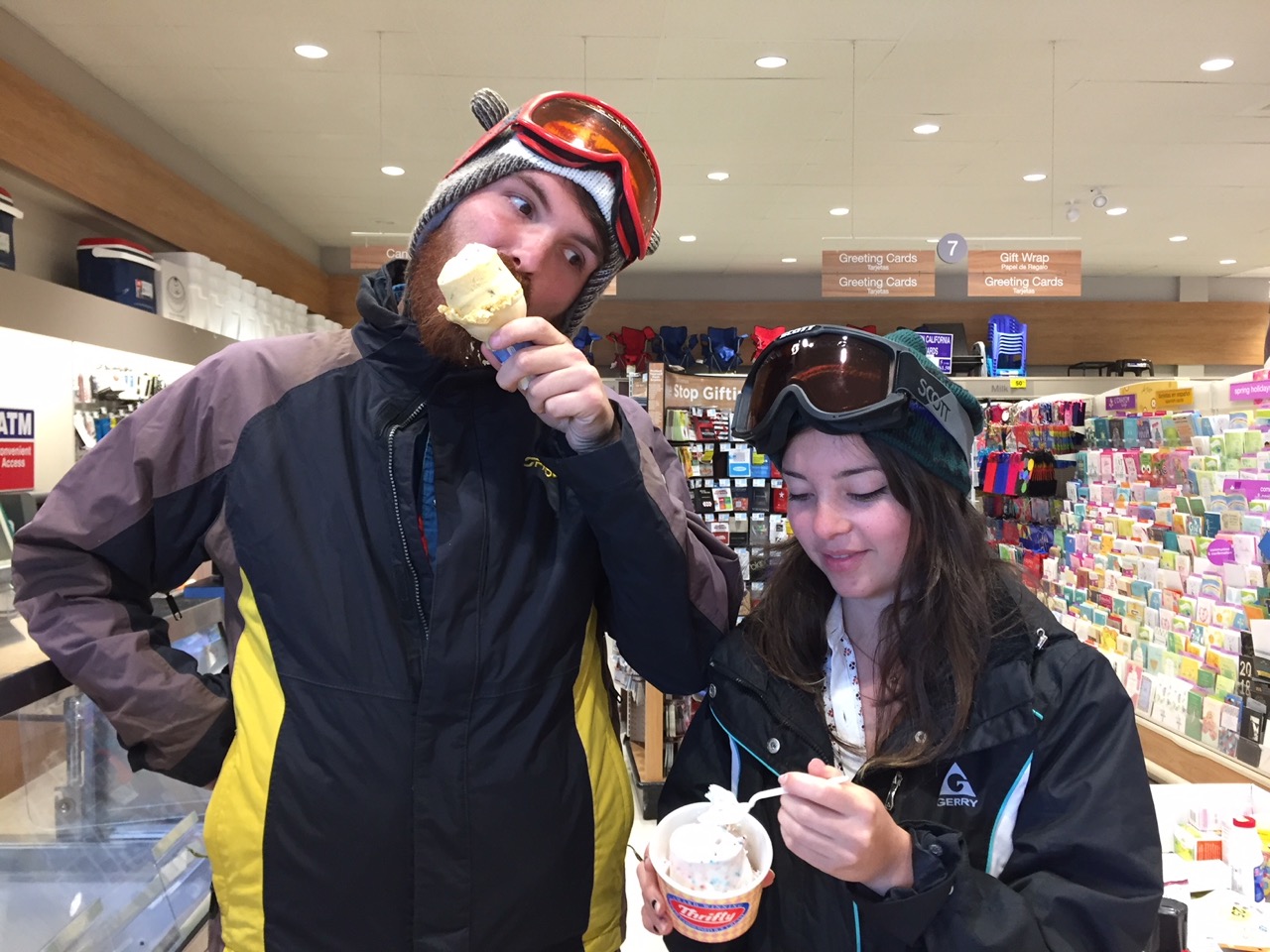 The first stop in their journey was Rite Aid, the home of Thrifty brand ice cream. With its distinctive cylindrical shape, a scoop of Thrifty ice cream has been a go-to treat for generations of Angelenos. At the time of our duo’s visit, a collection of classic flavors were available including Chocolate Chip and Cookies ‘N Cream, but there were also more exotic offerings such as Medieval Madness and Circus Animal. According to the store manager, Rocky Road is one of the most popular flavors. Sam decided to go with Birthday Cake, a vanilla-based ice cream with candy confetti sprinkles, while Wolf chose Butter Pecan.
“It tastes like fun,” said Sam. Although there are not actual bits of cake in the ice cream, Sam said her scoop had an undeniable cake-like taste.
“Thrifty lives up to its name,” said Wolf. “It’s a satisfying scoop and a good value.”

Our duo was given a hero’s welcome at Salt and Straw by their server, Kent. Explaining that Salt and Straw is known for its handcrafted locally-made ice cream, its generous sampling policy and legendary hospitality, Kent was ready to show our explorers their options. The Portland, Oregon-based company offers variations on traditional flavors such as vanilla and coffee, but prides itself on incorporating ingredients that are not usually found in ice cream. For instance, Kent suggested that the duo try Duck Crackling with Cherry Preserves. The flavor is part of a Salt and Straw program where the company collaborates with guest chefs to come up with innovative ice creams using the best locally-sourced ingredients. Both Wolf and Sam were intrigued by the “meaty” sample of ice cream made in part with duck fat, molasses, salted custard and candied duck skin brittle. However, when it came to choose their own scoop, Wolf went with the Black Olive Brittle and Goat Cheese while Sam went with Roasted Beets and Humboldt Fog—another guest chef collaboration.
“It’s weird in a good way,” said Wolf. “I never thought an olive flavor would register as sweet.”
A fan of Humboldt Fog, Sam said she could definitely taste the cheese in her scoop.
“The roast beets are more subdued,” she said, “but they add some nice color.”
Wolf added that although the flavors in his selection were not ones he would normally gravitate to in ice cream, the risk was worth the tasty reward.
“When you come here, be in adventure mode,” he said.
“It’s ice cream that makes you think.” said Sam. 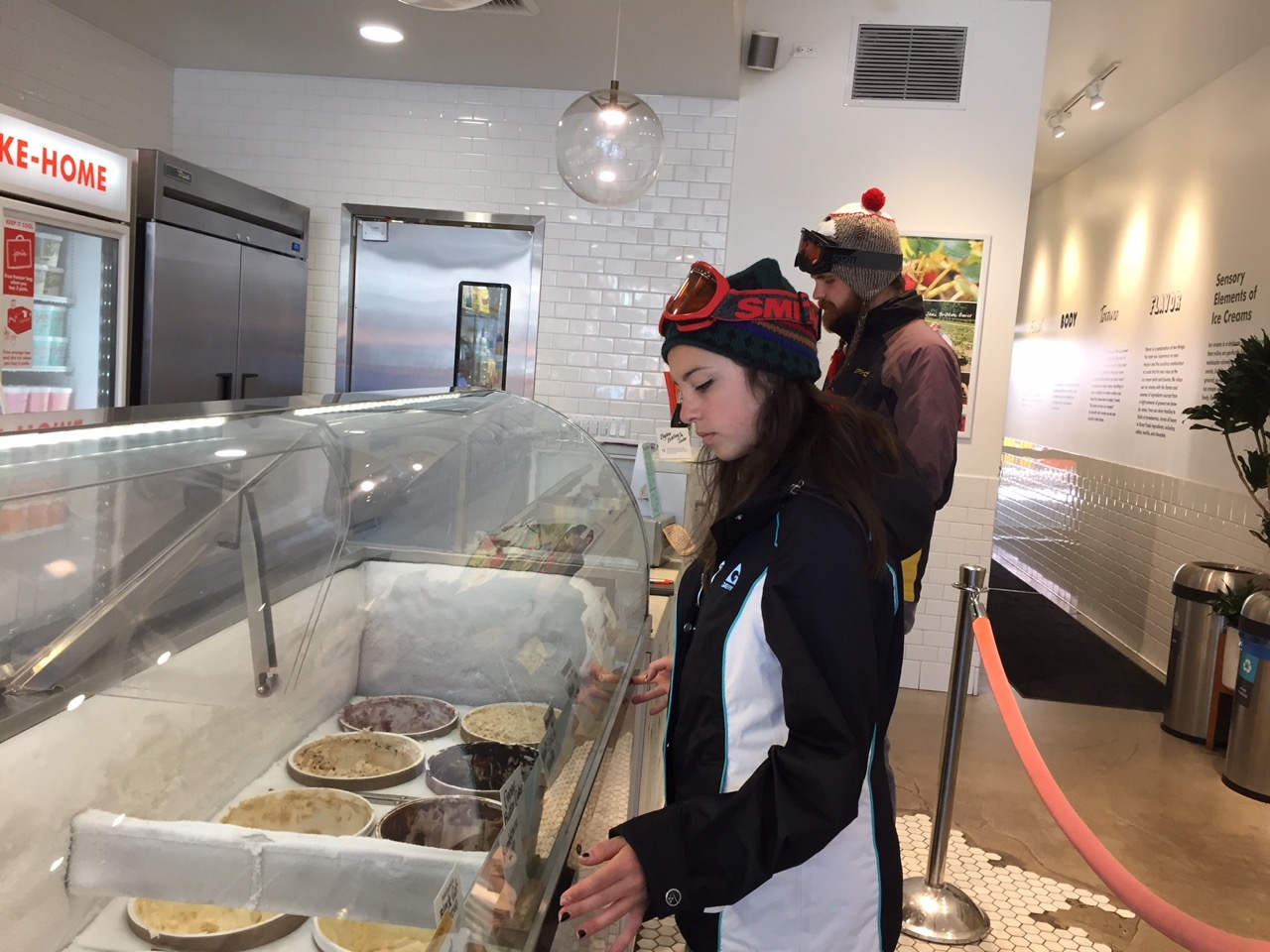 Checking their compasses, the explorers headed southwest down the street to Jeni’s Splendid Ice Creams. Based out of Columbus,Ohio, Jeni’s is the brainchild of Jeni Britton Bauer, a woman whose interest in the essential oils used in perfume led her to mix chocolate ice cream with cayenne pepper oil and discover a whole new career. The store offers a rotation of seasonal and experimental flavors throughout their ice creams, buttermilk frozen yogurts, sherbets and vegan options. According to Kate, our duo’s server, some of the most popular flavors are Brown Butter Almond Brittle and Salty Caramel. Wolf decided to go with one of the experimental flavors, Pickled Mango, which places the fruit within sweet cheese ice cream.
“It has a left field kind of sweet,” said Wolf. “The fermented flavor is subtle. I love it.”
Sam chose Reisling Poached Pear Sorbet.
“Very light,” said Sam, between licks. “Pure pear bliss!”
Our duo was particularly fond of the shade found in Jeni’s back porch as they enjoyed their ice cream. Perhaps this was because it was 81 degrees outside and they were wearing parkas, hats and goggles, but one can’t be sure. 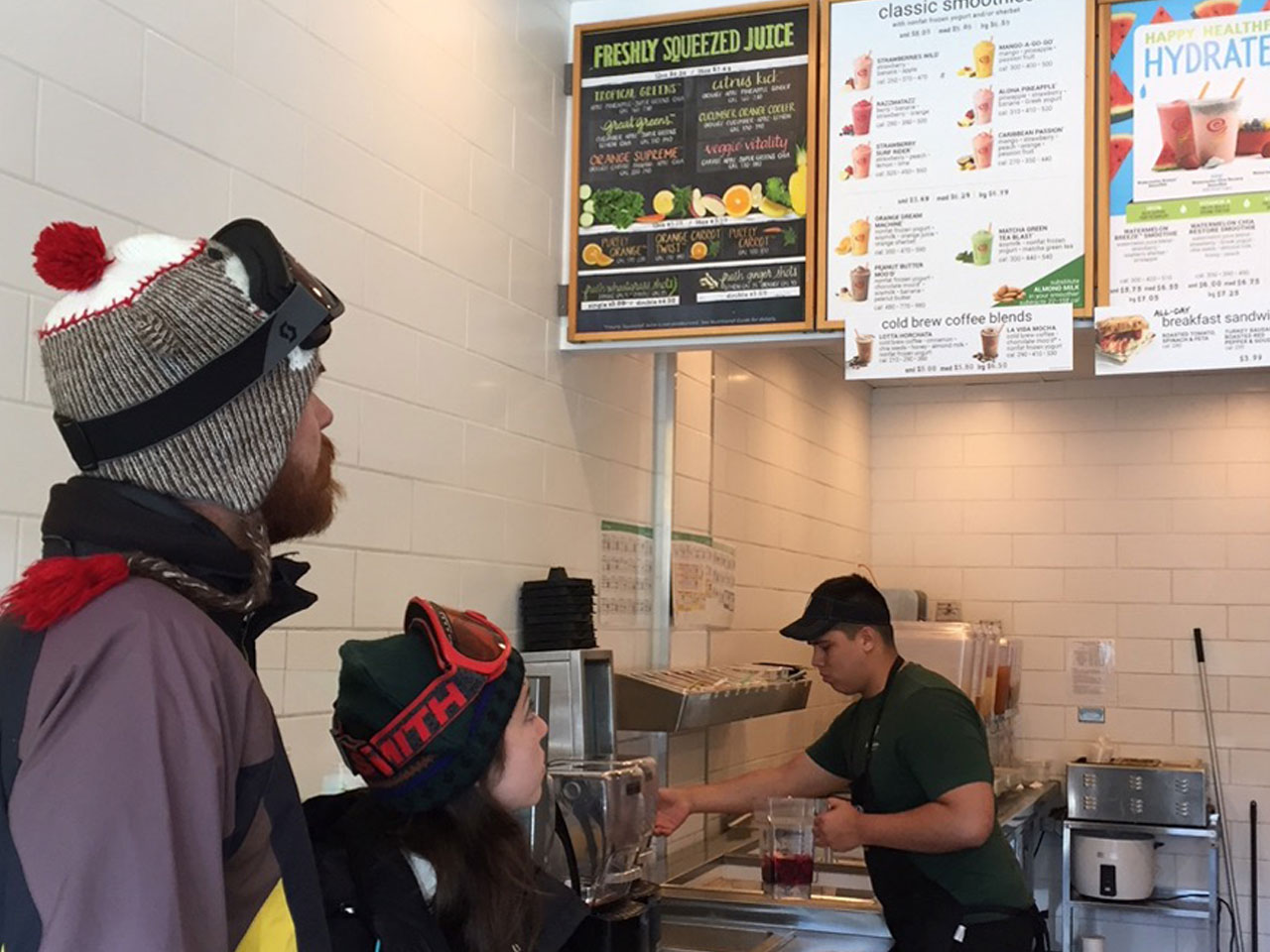 A quick trek across the street led our adventurers to Jamba Juice. Although this current location has been open a little over a year, Jamba Juice has been a fixture of the Larchmont frozen tundra for over a decade, beginning with a location up the street. Jamba Juice offers a wide variety of smoothies, juices, light meals and snacks, but our explorers focused on smoothies that featured sherbet. Sam chose the Razzmatazz, a smoothie containing strawberries, orange sherbet and bananas, but elected to skip the bananas and increase the strawberries. Wolf stayed in a mango state of mind and ordered a Mango-A-Go-Go, a smoothie containing mangos and pineapple sherbet. He found the Mango-A-Go-Go “light, refreshing and not super-sweet.” Sam also found her modified smoothie refreshing. “It’s a little tart—it wakes you up a bit,” she said. 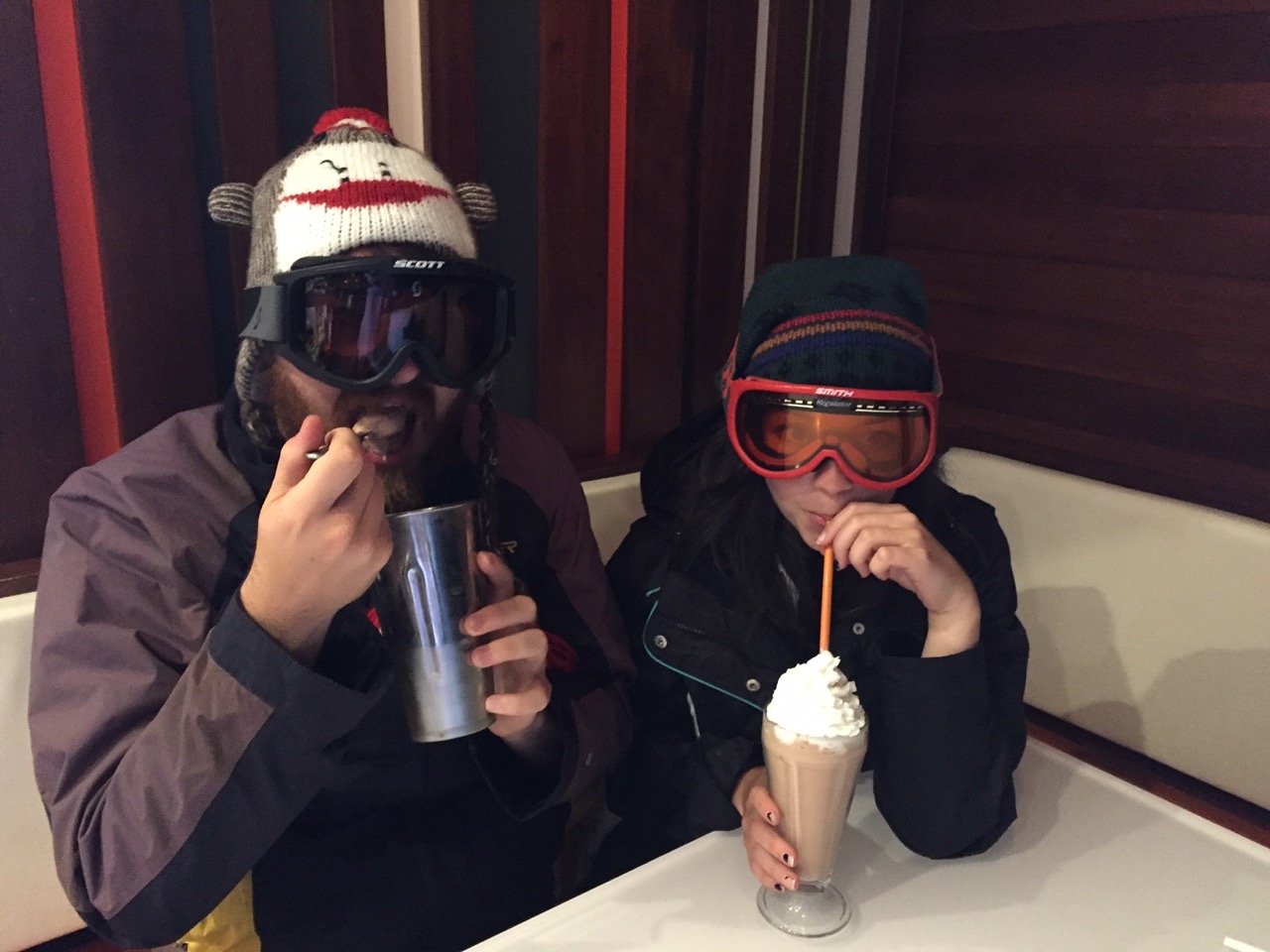 Our explorers ended their journey at Burger Lounge. Perhaps more well-known for their “grass-fed burgers,” Burger Lounge also offers chocolate, vanilla and strawberry—with organic strawberries— shakes. Wolf and Sam opted to share a chocolate and vanilla swirled shake. Tucked away in a booth, Wolf admired the “old-timey” presentation of the shake topped with whipped cream and served in a parfait glass.
“It’s a classic throwback to good, old-fashioned milkshakes,” he said. Between sips, Sam said that the shake was “very smooth.”

Overall, Wolf was impressed by what he discovered during his Larchmont expedition.
“There is such an abundance of options,” said Wolf, “and within those options, so many flavors.”
In fact, our adventurers only explored the tip of the iceberg when it comes to cold, refreshing options on Larchmont. If our duo had widened their search to include drinks blended with ice, an entire world of coffee drinks and more from purveyors like Starbucks, Peets, Groundworks, and go get em tiger would have been opened to them. (Fun Fact: Although no longer on the boulevard, Coffee Bean and Tea Leaf created some of their first ice-blended drinks on Larchmont!)Fired up by the possibilities, Sam said she would readily agree to another expedition. Wolf agreed and said he would suggest others try it, too, but that maybe, unlike our duo, they should wear less wintery gear. 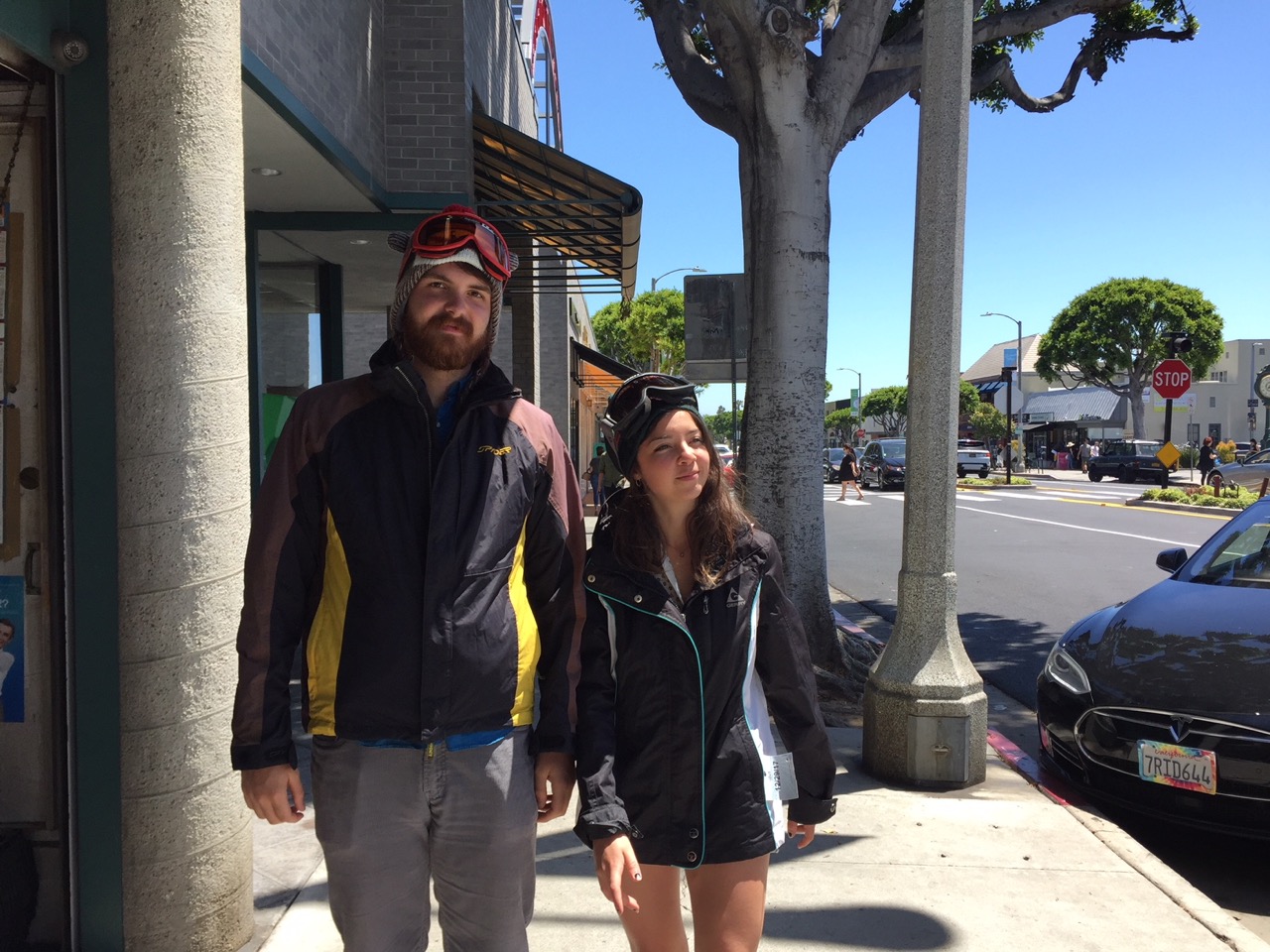 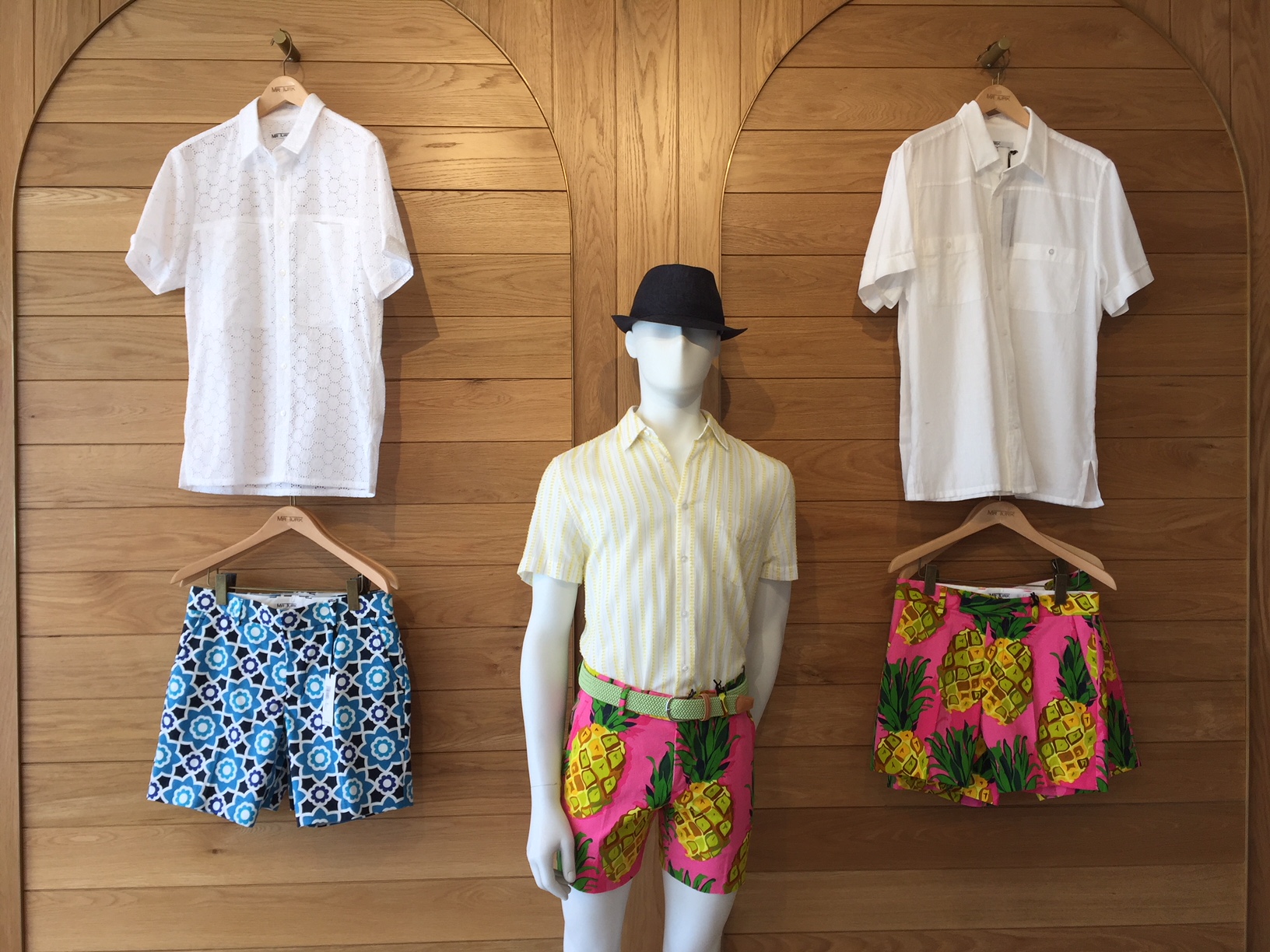 Make Grads and Dads Glad With Gifts So Fab!

May 22, 2018. By Sheila Lane | Around Larchmont
‘Tis the season to recognize the diligent heroes among us—the student who drank vats of coffee to push through those last exams and the man who endlessly drove his car around the block in hopes of getting his baby to sleep. Yes, it’s time to celebrate grads and dads in a big way. Fortunately,...